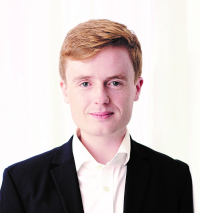 ‘Any production of Albert Herring first and foremost stands or falls on the vocal and dramatic ability of the tenor cast as Herring himself and this production was blessed with a fine young singer, Louis Hurley, who was able to traverse the musical and emotional terrain with considerable skill and emotional conviction.’

After completing a Bachelor of Music and Graduate Diploma of Music at the Western Australian Academy of Performing Arts (WAAPA), tenor Louis Hurley furthered his studies, as a Hazell Scholar, with a Master of Music at the Guildhall School of Music & Drama, London under the tutelage of Adrian Thompson. Whilst in London, Louis performed at both the Wigmore Hall and the Barbican Hall.

In 2022, Louis will make a number of important debuts including Messiah with the Melbourne Symphony Orchestra, 1st Prisoner (Fidelio) with the Sydney Symphony Orchestra under the baton of Simone Young and in Haydn’s ‘Nelson Mass’ with Sydney Philharmonia Choirs. He will also return to Pinchgut Opera to perform the roles of Acis (Acis and Galatea), Arcas (Medée), and Tibrino (Orontea).

Most recently Louis has been heard at the Adelaide Festival in the role of Flute in Neil Armfield’s production of Britten’s A Midsummer Night’s Dream, and in the Montverdi Vespers with Pinchgut Opera. Further roles include the title role in Albert Herring and Pluto/Mercure (Orpheus in the Underworld) for Melbourne Conservatorium; Jaquino (Fidelio) and Don Basilio (The Marriage of Figaro) for Melbourne Opera; Giuseppe (La Traviata) for West Australian Opera, and Older Son (Dead Man Walking, Heggie) at the Barbican, London.

On the concert platform he has been heard in Dvorak’s Requiem and Mass in D, Mozart’s Coronation Mass, and in song cycles of Schubert (Die Winterreise), Schuman (Dichterliebe), Beethoven (An die ferne Geliebte), Brahms (Liebeslieder Waltzer) and Britten Canticles.

The recipient of numerous awards and scholarships, Louis was the winner of the 2019 Royal Melbourne Philharmonic Aria Competition and the Hans & Petra Henkell Award at the 2019 National Liederfest. A Melba Opera Trust Scholar in 2020 & 2021, as the recipient of the Joseph Sambrook Opera Scholarship, he is also an alumnus of Melbourne Opera’s Richard Divall Emerging Artist Programme, where he was recently made an Associate Artist.

Louis Hurley is managed by Graham Pushee: graham@artsmanagement.com.au
December 2021
This biography is for general information purposes only and not for publication.
Please contact Arts Management for an up-to-date biography to suit your needs.