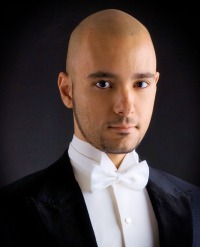 Mitridate, re di Ponto, Festival Vicenza in Lirica
“ . . . Shanul Sharma . . . lightning-fast and radiant high notes, which fill the theatre, ample technical and scenic confidence, with an important charisma. A true king . . . The authoritative posture, in addition to the penetrating gaze, makes the idea of the monarch.”
Cristina Miriam Chiaffoni, OperaLibera.net, September 2021 (translated from Italian)

Il viaggio a Reims, Opera Australia
“Sharma has a voice that exemplifies the principles of bel canto – an ease throughout his much extended range, musical clarity in all fioritura and a melting command of morbidezza...”
Victoria Watson, Sounds Like Sydney, October 2019

Ghost Sonata, Opera Australia
“Particular mention must be made of tenor Shanul Sharma. The role of the Student is extraordinarily demanding, and he was flawless throughout, depicting the considerable emotional range throughout the vocal demands.”
Peter Hurley, Classic Melbourne, September 2019

“As the student, tenor Shanul Sharma, delivers the angular atonal energy of Reimann’s vocal line with resplendent clarity, precision and beauty of sound even when the melodic shapes are so sharp-cornered to almost to seem self-parodies.”
Peter McCallum, Sydney Morning Herald, September 2019

The Barber of Seville, Co-Opera
“Sharma, is magnificent in the tenor role of Count Almaviva. He not only has an astounding voice but he also establishes a superb characterisation.”
Barry Lenny, May 2018

“Shanul Sharma as Almaviva is a handsome and stylish performer. The astonishing demands in his music are met fearlessly, top notes launched with ease, elaborate ornamentation delivered with a flourish.”
Ewart Shaw, The Advertiser, May 2018

Il Signor Bruschino, Lyric Opera of Melbourne
“Sharma’s distinctive tenor voice with its extraordinary upper extension and flexibility was very well suited to the demands of Rossini’s more florid passages. He made an appealingly sensitive lover whom you couldn’t help but cheer on no matter how outrageous his claims.”
Heather Leviston, Classicmelbourne.com.au, June 2016

Werther, Lyric Opera of Melbourne
“. . . Shanul Sharma makes an auspicious debut in the title role, his rather exciting tenor voice reaching any and all high notes with relative ease . . . Sharma’s kind eyes and gentle nature suited the role of ardent, lovelorn poet Werther. His performance of well-known aria ‘Pourquoi me réveiller?’ is a highpoint of the opera.”
Simon Parris, Simonparrismaninchair.com, October 2014

Tenor Shanul Sharma Shanul made his operatic debut in 2014 with Opera Australia as Don Ramiro in Rossini’s La Cenerentola, followed by Madman in Berg’s Wozzeck (2019) and the roles of Il Conte di Libenskof in Rossini’s Il viaggio a Reims and The Student in Reimann’s The Ghost Sonata to critical acclaim in both Sydney and Melbourne in 2019. Shanul has also appeared in concert with the Opera Australia Orchestra in 2019 for Mazda Opera in the Domain which was broadcast live on ABC Classic FM.

With other companies most notably Shanul has appeared as Il Conte di Libenskof for the Bolshoi Theatre of Russia in Moscow (2020 & 2019) and the Rossini Opera Festival in Pesaro, Italy (2018); in the title role of Mozart’s Mitridate, Re di Ponto at Teatro Olimpico for Festival Vicenza in Lirica (Sept 2021); Il Conte d’Almaviva in Rossini’s Il barbiere di Siviglia for Teatro del Giglio in Lucca, Italy (2018); and Ernesto in Donizetti’s Don Pasquale in Pavia, Italy (2017). Shanul  also represented the Rossini Opera Festival at the prestigious LaVerdi Auditorium in Milan as the tenor soloist in Rossini’s Stabat Mater and at the Norwegian National Opera in Oslo in 2018, and performed the roles of Florville in Rossini’s Il Signor Bruschino, the title role in Massenet’s Werther and the tenor soloist in Mendelssohn’s oratorio Elijah.

Shanul regularly appears in festivals and gala performances in Australia with artists such as Cheryl Barker and Teddy-Tahu Rhodes, as well as in Italy and the United Kingdom, featuring most notably in Christopher Tin’s Grammy Award winning composition Calling All Dawns at the Llangollen Festival in Wales in 2017.

Shanul holds an MA in Advanced Vocal Studies from the Wales International Academy of Voice in Cardiff, UK and is a winner of the 2017 Canto Lirico discipline and the Rossini International Award from Pesaro, Italy. He remains the only artist to have won both the awards in the same calendar year. In 2019, he was awarded Broadway World Sydney’s Best Male Performer in an Opera for his performance as The Student in The Ghost Sonata for Opera Australia and was a part of the company's Moffatt Oxenbould Young Artist Program from 2018-2021.

Shanul Sharma is managed by Graham Pushee: graham@artsmanagement.com.au
May 2022
This biography is for general information purposes only and not for publication.
Please contact Arts Management for an up-to-date biography to suit your needs.