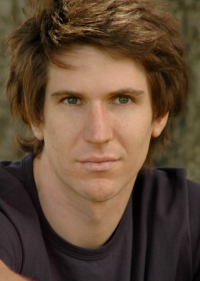 “…the toreador Escamillo, is conceived of as an overbearing but affable celebrity with sequined clothes and obsequious entourage, and Luke Gabbedy projected this with domineering confidence, the voice firm and well-set”.
Peter McCallum, Sydney Morning Herald, March 27 2017

“More interesting were the voices of the smugglers, Luke Gabbedy (Dancairo) … whose scenes were played with a swaggering bravado and lusty singing befitting the tough guys”

“Luke Gabbedy, as the loyal friend Frederic, was among the most effective, and sang with well-articulated clarity.”

“…singing with burnished tone and purposeful strength, Luke Gabbedy's Aeneas was equally impressive. In a role that can seem bland, he found emotional depths instead.”

“Baritone Luke Gabbedy gives an excellent performance of Figaro. A splendid Italian-sounding baritone with a winning smile, he wins over the audience the moment he rides on stage on his antique bicycle.”

Luke Gabbedy completed a Diploma of Performing Arts and Bachelor of Music Performance at the West Australian Conservatorium of Music, and a Graduate Diploma of Education at the Edith Cowan University. He has been a finalist in many major singing competitions including the Covent Garden National Opera Studio Scholarship, the German Operatic Award, second place in the Metropolitan Opera Young Artist Study Award, second place in the National Operatic Aria Competition and the McDonald’s Aria.

This year Luke will perform the roles of Ping (Turandot), Sharpless (Madama Butterfly) and Giorgio Germont (La Traviata), appear in the Great Opera Hits and Uluru concerts and HSBC’s Opera in the Gardens, as well as cover major roles including Count Di Luna (Il Trovatore), Ruggiero (La Juive) and Ezio (Attila), all for Opera Australia.

At Opera Australia, Luke has most recently been heard as Cascada (The Merry Widow), Sacristan (Tosca), Jago (Ernani), Escamillo (Carmen), and in the Great Opera Hits performances and HSBC’s Opera in the Gardens. He had also been engaged to perform Hermann (Tales of Hoffmann) and Gunther (Die Gőtterdämmerung) and to cover the title roles of Don Giovanni and Eugen Onegin, and Donner (Das Rheingold) for the company.

He has also performed the title role in The Barber of Seville, Count Almaviva (The Marriage of Figaro), Marcello (La bohème) and Silvio (Pagliacci) for West Australian Opera, Yamadori for State Opera South Australia and featured as Richard Nixon in The Nixon Tapes (John Adams) for the Vivid Festival at Sydney Opera House.

Luke was a member of the West Australian Opera Chorus, during which time he travelled to Italy to sing Masetto in Don Giovanni at the Opera Theatre and Music Festival of Lucca, and in 2002 became a member of the West Australian Opera Young Artist Program. In the same year he was also invited to be a Developing Artist of the Australian Opera Studio. Roles during this time included Count Almaviva (The Marriage of Figaro), Demetrius (A Midsummer Night’s Dream), Nardo (La Finta Giardiniera), Melisso (Alcina), Paris (Romeo et Juliette), Imperial Commissioner (Madama Butterfly), Anthony (Sweeney Todd), St Brioche (The Merry Widow), the Café Manager (Greek), Riccardo (The Sound Garden), and the Dryblower in Iain Grandage’s The Dryblower and the Water Girl (a new opera for children commissioned by the Australian Opera Studio).In 2003, Luke sang Escamillo in Carmen for Simply Opera, touring NSW, after which he briefly became a member of Opera Australia’s chorus, singing the role of Narrator in the company’s tour of Midnite in both Melbourne and Adelaide, before joining the ranks of the Principal artists.

Luke Gabbedy is managed by Graham Pushee: graham@artsmanagement.com.au
February 2022
This biography is for general information purposes only and not for publication.
Please contact Arts Management for an up-to-date biography to suit your needs.