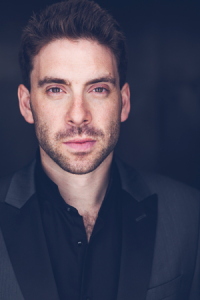 “…Popular baritone Dundas completes the journey from Young Artist to true leading man, delivering a magnetic, involving performance.  Of all the singers, Dundas’ voice seems best suited to the microphones, resulting in his vocals being the most impressive in a cast of highly capable singers.”
Simon Parris,  simonparrismaninchair.com, March 23 2018

Carmina Burana, West Australian Symphony Orchestra
“….Lavish laurels to baritone Samuel Dundas; his singing was the chief joy of the performance.  I cannot too highly praise his artistry.  It was a model of its kind, with finely fashioned phrases and spot-on pitch”.
Neville Cohn, The West Australian, June 2015

A graduate of the Melba Conservatorium of Music, Samuel Dundas’ performance experience encompasses opera, musical theatre and concert performances. He has sung in concert throughout Australia and New Zealand, including with the Adelaide, Melbourne, Tasmanian and West Australian Symphony Orchestras, the Australian Youth Orchestra and the Auckland Philharmonia Orchestra.

This year Samuel’s engagements will include multiple appearances at Tasmania’s Ten Days on the Island Festival in March, as well as taking the title role for both Victorian Opera and for State Opera South Australia in Richard Meale’s opera Voss.

In 2020 he performed the role of Marcello in La Boheme for Opera Australia, and appeared in the Chamber Landscapes series at Ukaria for Adelaide Festival, and at Opera in the Alps.  He had also been engaged to return to both Victorian Opera for Frank/Fritz in Die tote Stadt, and to West Australian Opera for Guglielmo in Cosi fan tutte.

After making his operatic debut with Opera Queensland in 2005, Samuel went on to become a member of Victorian Opera’s Artist Development program. Roles he has performed with Victorian Opera include the title role in Don Giovanni, Papageno (The Magic Flute), Golaud (Pelléas et Mélisande), Harasta (The Cunning Little Vixen), Guglielmo (Così fan tutte), Belcore, Harlequin (Ariadne auf Naxos), the Second Soldier (The Love of the Nightingale), Creon/The Messenger (Oedipus Rex) and Chief Clerk (Metamorphosis), as well as Schaunard in the Puccini: The Sacred and Profane Gala concert.

In 2013 Samuel won the Lady Fairfax New York Scholarship and in 2014 was the proud recipient of the inaugural Dame Heather Begg Award.

Samuel Dundas is managed by Graham Pushee: graham@artsmanagement.com.au
February 2021
This biography is for general information purposes only and not for publication.
Please contact Arts Management for an up-to-date biography to suit your needs.