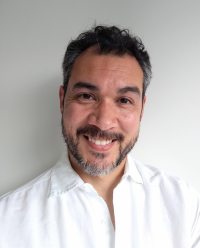 Graham Strahle, The Australian, May 2018

Pelham Andrews was perfectly suited to the role of Padre Guardiano, and his bass voice, which is already a fine instrument, is becoming silkier and silkier.

As Padre Guardiano, Pelham Andrews was magisterial and secure, his scenes with Melitone, John Bolton Wood, musically and dramatically effective.

Pelham Andrews has a gorgeous bass of chocolaty texture and manages to make Colline entirely flesh and blood. No mean feat.

Pelham Andrews was a dashing Méphistophélès, projecting and holding his character... His looks were in his favour, and his demon prince was by turns charming, taunting, sneering and wickedly triumphant.

Vocally he is a sinuous, cynical voluptuary.

This year Pelham will return to Adelaide Festival as bass soloist in the world premiere performances of Watershed, and to State Opera for Colline (La Bohème), Judd/Mr. Bonner (Voss), and Baron Douphol (La Traviata). His engagements on the concert platform will include Mozart Requiem with the Queensland Symphony Orchestra and Don Fernando (Fidelio) with the Sydney Symphony Orchestra and Chief Conductor Simone Young.

Most recently Pelham was engaged by State Opera South Australia, to sing the role of Basilio (The Barber of Seville), by Adelaide Festival for Snug (A Midsummer Night’s Dream) and as the bass soloist in A Child of our Time (Tippett), and by Melbourne Symphony Orchestra for Messiah. He’s also been heard as the Parson and Badger (The Cunning Little Vixen), Ben (Madeline Lee), The Bonze and the Imperial Commissioner (Madama Butterfly) the title role of The Mikado, Betto di Signa (Gianni Schicchi) and Tio Salvador (La Vida Breve), Pogner, (as well as covering Hans Sachs), in Act III of Die Meistersinger von Nürnberg, Lester Lamb in the world premiere of George Palmer’s Cloudstreet, and Sciarrone, (Tosca) all for State Opera South Australia, as well as Count Capulet in Romeo and Juliet in concert for the Tasmanian Symphony Orchestra, Geronte in Manon Lescaut,  the King in Aida and Commendatore in Don Giovanni for Auckland Philharmonia Orchestra and with the Adelaide Collective in Grandage’s Towards First Light.

Pelham has also sung Méphistophélès (La Damnation de Faust) and the King of Bambaras (Angelique) for Victorian Opera, and for Opera Australia he has appeared as Farfarello (covering The King of Clubs) in The Love for Three Oranges, and as Sparafucile and Monterone (Rigoletto), Lodovico (Otello), Zoroastro (Orlando), Baron Douphol (La Traviata), Speaker (The Magic Flute), Second Mate (Billy Budd), Flemish Deputy (Don Carlos) and Timur (Turandot), as well as covering King (Aida), Figaro (The Marriage of Figaro) and Masetto (Don Giovanni). He has also performed throughout Australia, Malaysia and Singapore with touring company Co-Opera, and won several awards including the McDonalds Operatic Aria.

Pelham Andrews is managed by Graham Pushee: graham@artsmanagement.com.au
February 2022
This biography is for general information purposes only and not for publication.
Please contact Arts Management for an up-to-date biography to suit your needs.