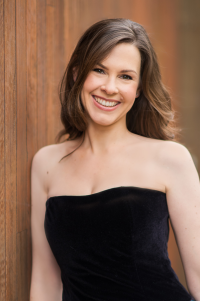 “Porter, with her faultless diction and lively facial expressions, gave a beautifully nuanced performance, bringing out the swatch of colours Britten uses with such subtlety, and effortlessly negotiating the vocal acrobatics.”

“Britten’s Les Illuminations…it seems it was almost made for Jacqueline Porter’s remarkable voice, which never wavered in its strength throughout this meandering tour de force of the soprano range.Jacqueline Porter negotiated the tortuous twists and turns that begin Marine with incredible dexterity, only moments after Britten calls on the singer to belt out ‘les chars d’argent et de cuivre’ in stab-like staccato bursts. And the jarring, but catchy, chromatic descent in the middle of Villes is always a moment to behold.”

“Porter delivered a crystal clear performance of Schubert’s classic lied The Shepherd on the Rock……. she shone like a diamond…. “

“Porter’s performance was fabulous. Her outstanding diction and evenness in rhythm and tone produced a powerful gentleness. This was musical poetry at its very best.”

“… Porter brought a silvery soprano to bear……soon laced with anxiety in her duet with the Count, before it took on a steely edge as the Countess. The climax of the recitative…was hair-raising, before Porter slid into a lusher tone for the bittersweet aria, her sound unfurling triumphantly in the final stanza.”

Susanna, Handel in the Theatre

“…Singing the title role of Susanna was Jacqueline Porter, whose beautiful operatic soprano voice soared through the theatre. She sang the part with lyric beauty and feeling”.
Tony Magee, CityNews.com.au, September 3, 2018

The Vow, Handel in the Theatre

“…Undisputed star of the show was Jacqueline Porter as Iphis. Her faultless technique combined with her excellent acting ensured that the climax of the work was truly chilling as she knelt with her father about to sacrifice her to pay for his military victory”.
Jennifer Gall, The Canberra Times, October 10, 2016

“…Jacqueline Porter was in magnificent voice…, her bell-like tone and exemplary diction lending focus to the tripping Hither, This Way as well as sultry and sensuous in Two Daughters of this Aged Stream (in ravishing duet with Howarth)."

“Jacqueline Porter's captivating voice and exceptional focus equipped her to shine as Cleopatra…..Porter' s skilfully controlled dynamics….. ensured a spine-tingling performance. Her final sombre offering, O take me from this hateful light, induced a reverent silence in the auditorium”.

“Porter created a beautifully complex character... a voice both rich and shimmering”

Jacqueline Porter holds an honours degree in Music Performance and a Bachelor of Arts (Italian) from the University of Melbourne and was the recipient of the 2010 Dame Nellie Melba Opera Trust Scholarship.

Equally at home on the operatic stage and the concert platform, Jacqueline appears regularly with Australia’s major symphony orchestras and choral societies. She has worked with celebrated conductors including Sir Neville Marriner, Vladimir Ashkenazy, Sir Andrew Davis, Richard Egarr and Oleg Caetani, and her recitals and concerts are frequently broadcast on ABC Classic FM. Her 2020 return to Sydney Symphony to perform Mahler Symphony No. 4 and orchestrated Schubert songs with Sir Donald Runnicles, has now been rescheduled for 2021, and she will also be heard this year with the Australian Classical and Romantic Orchestra in Les Illuminations (Britten), at Bendigo Chamber Music Festival in recital, at the Australian Festival for Chamber music, Townsville and at Hayllar Music Tours’ Spicers Hidden Vale Chamber music weekend.

Jacqueline has most recently been heard in Mozart’s Requiem, Solveig’s Song (Grieg) and Vocalise (Rachmaninov), and Messiah all with Melbourne Symphony Orchestra; Marriage of Figaro highlights (Australian Romantic and Classical Orchestra); St. Matthew Passion (Melbourne Bach Choir); Mass in Time of War (Haydn) and Mass No. 5 (Schubert) with Heidelberg Choral Society; Canberra Symphony Orchestra’s Opera Gala; 1st Niece in Peter Grimes with Sydney Symphony and in recital for Music in the Round and Melbourne Recital Centre’s Salon series.

In 2018 Jacqueline featured at the Woodend Winter Arts Festival, sang the title role in Susanna for Handel In The Theatre, Canberra, Beethoven 9 for Adelaide Symphony Orchestra, Brahms Requiem for Festival of Voices in Hobart, Hayden Nelson Mass and Mozart Requiem for Canberra Choral Society, Mozart Requiem for Melbourne Bach Choir and recitals at the Tasmanian Chamber Music Festival. Her 2017 engagements included the role of the Princess in Respighi’s The Sleeping Beauty for Victorian Opera, (also performed at Dark Mofo, Hobart) performances with the Melbourne Symphony Orchestra (Exsultate Jubilate, Thaïs and Beethoven’s Symphony No. 9), Adelaide Symphony Orchestra (A Night in Vienna), Brahms Requiem (Victoria Chorale), and Handel Salve Regina in St Paul’s Cathedral (with the University of Melbourne).

Career highlights have been Grieg’s Peer Gynt and Prokofiev’s Ugly Duckling (Sydney Symphony Orchestra also released on CD); Rachmaninoff’s The Bells and Mozart/Haydn arias (Melbourne Symphony Orchestra); Last Night of the Proms (Tasmanian Symphony Orchestra); Villa Lobos’ Bachianas Brasileiras no. 5 with renowned cellist Jian Wang and the cellists of the Sydney Symphony; an Adelaide Symphony Orchestra New Years’ Eve broadcast; Mélisande’s Song in Fauré’s Pelléas et Mélisande Suite with Vladimir Ashkenazy and Sydney Symphony Orchestra; the roles of L’Euridice and La Tragedia in Peri’s L’Euridice and Bach’s B Minor Mass (Woodend Winter Arts Festival); Mozart Exsultate Jubilate and Haydn Harmoniemesse for the Organs of the Ballarat Goldfields Festival; recitals with Caroline Almonte and the Australian String Quartet for the Dunkeld Festival of Music; Cleopatra in Alexander Balus (Handel) with Canberra Choral Society; Tavener’s Song of the Angel with the Tasmanian Symphony Orchestra for the Dark MOFO Festival; concerts with Renaissance ensemble, La Compañia; Opera in the Vineyard with David Hobson; a recital of Schumann Lieder for ABC radio and a performance at the Melbourne Town Hall with German organist, Joachim Neugart, featuring 20th Century works for soprano and organ.

Jacqueline Porter is managed by Graham Pushee: graham@artsmanagement.com.au
February 2021
This biography is for general information purposes only and not for publication.
Please contact Arts Management for an up-to-date biography to suit your needs.