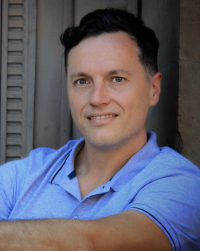 The Pearl Fishers, State Opera of South Australia
“ …Andrew Goodwin, as the pearl hunter Nadir, is exquisitely soft and mellow, and to hear their highly contrasting voices side by side  adds a frisson that helps propel many of the scenes: .
Graham Strahle, The Australian, May 14 2018

“ …Andrew Goodwin shone when he dreamed and reunited with Leila” .
Greg Elliott, InDaily.com, May 14 2018

“…Powerful, too was Andrew Goodwin’s Nadir…a delightfully elegant, light French-style tenor. Endearing in his solos and amazing in his duets, especially the core “Au fond du temple saint” with Doyle…the passionate highlight of the night…It was a transfixing moment in the opera:”.
Brian Angus, Bachtrack May 2018

Evangelist, St John Passion, Melbourne Bach Choir
“…This tenor has a flawless delivery, projecting each note across his compass with an exemplary balance .....Singing of this elating assurance is experienced rarely these days, and Goodwin struck a fine balance between empathy and simple story-telling...”
O'Connellthemusic.com, April 2017

Coriole Music Festival 2016 (with Daniel de Borah)
“…Their set of Rachmaninov songs rippled with emotion, and in Britten’s The Poet’s Echo they seemed to unlock every tiny inner flex and sensitivity of this composer’s hauntingly beautiful setting of the Pushkin text.  …Goodwin has a very special ability of letting the words just hang in the air”.
Graham Strahle, The Australian, May 2016

Auckland Philharmonia Orchestra, The Rake’s Progress
“Andrew Goodwin, as Tom, displayed the sort of clean-chiselled voice that could have been custom-built for the role. Not only was he deft in the many ingenious ensembles, but poignantly lyrical in arias like "Vary the song, O London".
William Dart, NZ Herald, August 2013

Canberra International Music Festival, Valentin Silvestrov’s Silent Songs
“Goodwin’s performance was magnificent. His flawless control belied the extraordinary difficulty of the task. He was able to evoke beautiful sensitivity for the music and the words and the moods created by the two. His crystal-clear tone effortlessly reached the heights and depths called for in the piece.”
Citynews.com.au, May 2012

“The principal pair, Andrew Goodwin (Tamino) and Emma Matthews (Pamina), are noble and true in voice and deed, both displaying gracious attractiveness of sound”

On the concert platform he has toured with the St Petersburg Philharmonic Orchestra with Maestro Temirkanov, performed with the Sydney, Melbourne, Queensland and Adelaide Symphony Orchestras, Moscow Chamber Orchestra, Sydney Philharmonia Choirs and has given recitals with pianist Daniel de Borah at the Wigmore Hall, and at the Oxford Lieder, Port Fairy, Huntington, Coriole and Canberra International Music Festivals.

This year, Andrew marks his return to the stage as Janik in the Sydney Chamber Opera production for Sydney Festival of Diary of one who disappeared (Janacek) and in his role debut as Lysander in Britten’s A Midsummer Night’s Dream for Adelaide Festival, directed by Neil Armfield. He will also be heard in the Britten Serenade for Tenor, Horn and Strings with the Sydney Symphony, at the Canberra International Music Festival and in Verdi’s Requiem and Carmina Burana (Orff) with Sydney Philharmonia Choirs. Andrew will also form part of the exciting new Australian Vocal Ensemble (AVE) with Artistic Director Katie Noonan.

In 2020 Andrew made his debut with West Australian Symphony in the role of Jacquino (Fidelio) with Asher Fisch conducting. He  also performed at the inaugural Bendigo Chamber Music Festival and sang Messiah with Sydney Chamber Choir. Further engagements were to include his return to the Auckland Philharmonia Orchestra for Creation, to Queensland Symphony for their Opera Gala, to the Canberra International Music Festival and the Australian Romantic and Classical Orchestra also for Creation, to the Melbourne Bach Choir to sing the role of the Evangelist in Bach’s St. John Passion, Verdi Requiem with Sydney Philharmonia Choirs, Elijah with Sydney University Graduate Choir, Opera in the Market, Melbourne and Messiah with the Queensland, Adelaide and Melbourne Symphony Orchestras. He was also scheduled to perform, at the BraVo awards in Moscow.

Other engagements include Britten’s Serenade for Tenor, Horn and strings (Adelaide and Melbourne Symphony Orchestras), a recital with pianist Mira Yevtich at the Concert Hall of the Mariinsky Theatre, St. Petersburg; Degtyarev's Russian oratorio Minin i Pojarsky with the Moscow Chamber Orchestra; Elgar’s The Dream of Gerontius at St John’s Smith Square, London; the roles of Lensky (Eugene Onegin) and Tamino (The Magic Flute) with the Bolshoi Opera and Egeo in Cavalli’s Giasone and Florival in L’amant jaloux (Grétry) and Orpheus in Haydn’s L’anima del filosofo for Pinchgut Opera.

Other notable opera performances include Andrew’s debut for Opera Australia as Fenton in Falstaff and the role of Avvakum in the world premiere of Rodion Shchedrin’s Boyarina Morozova at the Moscow State Conservatory; Belmonte in (Die Entführung aus dem Serail), Don Ottavio (Don Giovanni), Novice (Billy Budd), Janek (The Makropoulos Affair) and Tamino (Die Zauberflöte) for Opera Australia; return appearances at the Bolshoi for Alfred (Die Fledermaus) and the tour of the Bolshoi production of Eugene Onegin performing Lensky at The Ljubljana Music Festival, Slovenia, La Scala, Milan and Teatro Real, Madrid and The National Centre for the Performing Arts, Beijing. Andrew also made his debut at the Liceu, Barcelona as Silvio in Martin Y Soler’s L’Arbore di Diana, and his UK debut singing the role of Gomatz in Mozart’s Zaide with The Classical Opera Company.

Born in Sydney, Andrew studied voice at the St. Petersburg Conservatory under the direction of Professor Lev Morozov, graduating with a Bachelor of Music. He has also studied with Robert Dean in the UK.

Andrew Goodwin is managed by Graham Pushee: graham@artsmanagement.com.au
February 2021
This biography is for general information purposes only and not for publication.
Please contact Arts Management for an up-to-date biography to suit your needs.