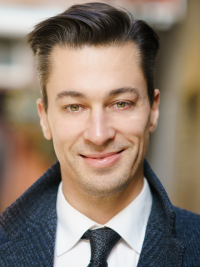 “The feisty, amorous chemistry between Ede and Christopher Tonkin’s Marcello was convincing. The tall and charismatic baritone is both dramatically and vocally accomplished.”

“Tonkin’s creamy baritone and sweet falsetto were a treat to listen to in close proximity while his chiselled features and contemptuous body language gave an extra arrogance to There’s a Law “
Rosalind Appleby, Limelight Magazine, May 2017

"…simply superb as the Countess’ brother. A tall and striking man with a substantial voice with honeyed tone, he illuminated the character of the Count easily…"

The Elixir of Love, Victorian Opera

Australian baritone Christopher Tonkin has developed a reputation as one of Australia's most successful baritones, regularly engaged in principal roles in opera houses and concert halls in Europe, as well as his native Australia.

Christopher will start 2022 by returning to the stage as the White Rabbit in the Australian Contemporary Opera Company’s production of Alice’s Adventures in Wonderland (Todd/Gottlieb), performing with the Melbourne Bach Choir in an Easter performance of Bach and Mozart, and in the role of Bill in Melbourne Opera’s presentation of The Rise and Fall of the City of Mahagonny (Weill/Brecht).

He will also feature in the Book of Longing (Glass) to be presented by the Australian Contemporary Opera Company.

Recent engagements, which unfortunately had to be cancelled, included his role debut as Scarpia (Tosca) at City of Stonington’s Opera in the Park; Bach’s St. John Passion with the Melbourne Bach Choir; James Macmillan’s Christmas Oratorio with Melbourne Symphony and the roles of Harry M. Miller in Judy Australia 1964, and Leonard in Pieces of Margery (May Lyon). He however made his very successful debut West Australian Opera as Silvio in Pagliacci last year.

A graduate of the Royal Academy of Music, Christopher also studied at the Victorian College of the Arts in Melbourne and was resident principal baritone at the State Opera in Hannover, Germany 2010-2016.

Christopher Tonkin is managed by Graham Pushee: graham@artsmanagement.com.au
February 2022
This biography is for general information purposes only and not for publication.
Please contact Arts Management for an up-to-date biography to suit your needs.