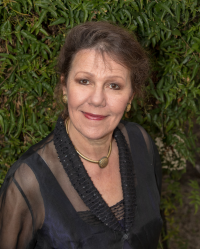 “…The wonderful mezzo-soprano, Elizabeth Campbell, stayed with Il Trovatore in the role of Azucena, with a remarkable version of Condotta ell'era in ceppi”.

“Elizabeth Campbell’s glowing but hard-edged voice synthesized with her noble but all-to-human jealousy of Aida, creating a totally credible character who inspired sympathy as well as hatred.”

“Elizabeth Campbell impressed as the mill owner Teresa, who raised the orphaned Amina. Her voice remains rich and secure and her warm characterisation was deeply touching.”

“Elizabeth Campbell brings to her songs the intelligence and commitment she devotes to her operatic repertoire and projects emotional depth.”

Elizabeth Campbell is one of Australia’s most distinguished mezzo-sopranos. She is a graduate of the Sydney Conservatorium of Music, and was awarded a Music Students Overseas Study Foundation Scholarship and an Australian Musical Foundation grant for study in London and Europe. She was a finalist in the Munich International Competition, winner of the Elly Ameling Lieder Prize in the ‘s-HertogenboschSinging Competition and has represented Australia in the Singer of the World Competition in Cardiff. In 1997 she was awarded the Bayreuth Scholarship.

This year Elizabeth returns to State Opera South Australia in the role of Mrs. Grose (Turn of the Screw) and will give the world premiere performance of a new work by Andrew Ford, The Blessing, at Coriole Festival.

In recent seasons she has been heard in Songs of a Wayfarer (Mahler) with the Adelaide Hills Chamber Players, A Child of our Time (Tippett) for Adelaide Festival, Mrs Sedley, one of her signature roles, in Peter Grimes with Sydney Symphony Orchestra, David Robertson conducting, (which she was also scheduled to perform with Auckland Philharmonia Orchestra); Emma in Summer of the Seventeenth Doll, Christina in Christina’s World and Katisha in The Mikado, all with State Opera South Australia, and Mother in Hansel and Gretel with Melbourne Symphony Orchestra. Her recital and concert engagements have included a recital in Adelaide, a return to the Astra Ensemble, Melbourne and an appearance at Melbourne Recital Centre.

More recently Elizabeth has been heard in the roles of The Sorceress in Dido and Aeneas, Amneris in Aida, Niobe/Nurse/Narrator in The Love of the Nightingale, Maddalena in Rigoletto, Teresa in La Sonnambula, Mrs Sedley in Peter Grimes, and Grimgerde in Die Walküre and First Norn in Götterdämmerung, all for Opera Australia; Public Opinion in Orpheus in the Underworld, Herodias in Salome and Amneris (for which she won a Helpmann Award) for State Opera of South Australia; her role debut as Klytemnestra in Elektra, Acuzena in Il trovatore and Mrs Sedley in Peter Grimes for West Australian Opera; and Fricka in Das Rheingold for Auckland Philharmonia Orchestra.  In addition to recitals in South Australia and Victoria her performances have included Elijah as well as returns to State Opera of South Australia for semi-staged versions of La Vida Breve and Gianni Schicchi and the Verdi Spectacular.

One of Australia’s leading concert artists and recitalists, Elizabeth appears regularly with leading Australian symphony orchestras, choirs and festivals and has a wide repertoire which includes works by many contemporary Australian composers including Peter Sculthorpe, Richard Mills, Ross Edwards, Graeme Koehne and Andrew Ford. Internationally, she has performed Handel’s Messiah at the Royal Opera House, Covent Garden, toured the USA with the Sydney Symphony, and given recitals at the Wigmore Hall, in Den Haag and Antwerp.

Elizabeth Campbell is managed by Graham Pushee: graham@artsmanagement.com.au
April 2022
This biography is for general information purposes only and not for publication.
Please contact Arts Management for an up-to-date biography to suit your needs.