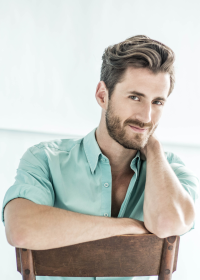 War of the Worlds, Los Angeles Philharmonic
The baritone Hadleigh Adams delivered a comic tour de force as General Lansing, who becomes unhinged as he extolls a Trumpian 'wall of defense' that is supposed to keep aliens at bay. Gosfield gives him a full-on mad scene, with deranged atonal coloratura.”
Alex Ross, The New Yorker January 2018

Young Caesar, Los Angeles Philharmonic
"A standout was the Nicomedes of New Zealand-born Hadleigh Adams, who the joined the cast at the eleventh hour. Adams' resonant baritone maintains unique beauty of tone throughout his range."
Arya Roshanian, Opera News June 2017

La Bohème, San Francisco Opera
"However, it was the fluid and touchingly attentive performance by Hadleigh Adams as Schaunard which completely captivated me. It's rare to encounter a Schaunard who can demonstrate so much genuine charisma and communicate so much compassion."
George Haymont, Huffington Post, January 2015

Hailed a “comic tour de force” by Alex Ross of the New Yorker following performances with the Los Angeles Philharmonic, baritone Hadleigh Adams is a baritone with a very strong lower extension enabling him to perform many bass-baritone roles. With a repertoire spanning from Rameau and Vivaldi all the way to Ades and Francesconi, he is an artist equally at home on the opera stage as he is in concert.

This season’s highlights will include return performances with the San Francisco Opera in the world premiere of John Adams’ Antony and Cleopatra in the role of Agrippa, and Commissioner and 1st Officer in Les Dialogues des Carmelites; Gounod’s Romeo and Juliette (Mercutio) with San Diego Opera; A Streetcar Named Desire (Stanley Kowalski) and Fellow Travelers (Hawkins Fuller) with Florida Grand Opera; and La belle et la bete (La bete) for Opera Parallele. His engagements on the concert platform are scheduled to include Carmina Burana (South Florida Master Chorale), Beethoven Symphony No. 9 with Seattle Symphony and Das knaben Wunderhorn with the Jacksonville Symphony.

Recent engagements have included the US premiere of Luca Francesconi’s Quartett (Valmont), San Francisco Opera’s new production of Tosca (Angelotti), his European debut with the Nederlandse Reisopera in Sondheim’s A Little Night Music (Carl Magnus), and a return to the Cincinnati Opera for Gounod’s Romeo et Juliette (Mercutio). On the concert platform he performed Carmina Burana with the San Francisco Symphony, Messiah with the New Zealand, Nashville and Milwaukee Symphony Orchestras.

On the concert platform he has performed Beethoven’s Mass in C with the Philharmonia Baroque Orchestra, Bach’s Cantata 80 with the Atlanta Symphony Orchestra, Messiah with the American Bach Soloists, Bernstein’s Candide with the San Francisco Symphony (Maximilian), Stravinsky’s Oedipus Rex (Creon/Tiresias) with the London Philharmonia Orchestra and in staged performances of Bach’s St Matthew Passion (Jesus), at London’s Royal National Theatre.

Hadleigh Adams is managed by Graham Pushee: graham@artsmanagement.com.au
February 2022
This biography is for general information purposes only and not for publication.
Please contact Arts Management for an up-to-date biography to suit your needs