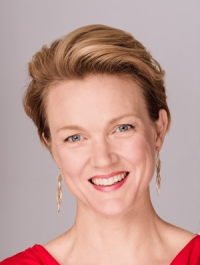 “Caitlin Hulcup as the imperious, shrewish Fricka…exuded power, hurt and strength all at once. Another wonderful actor, she acted as much with her rich, secure, velvety mezzo as with her facial expressions, exiting triumphantly after beating Wotan into submission – with a devastating arch of her left brow”

“Hulcup captured me from the beginning and was in a class of her own with that must-have sound and dramatic interpretation necessary for the lead role. I was eagerly awaiting Orfeo's famous complaint, ‘Che farò senza Eurydice’, and was not at all disappointed. Hulcup had full control over her instrument and so it was easy to enjoy.”
Fiona Chow, Press Reader Finnland, November 2019

Radamisto (Title Role), Opera Lafayette, Washington and New York
“Australian mezzo-soprano Caitlin Hulcup made an outstanding American debut in the title role. Hulcup applied a sweet, honeyed legato to the gorgeous “Cara sposa, amato bene,” adorned with elaborate embellishments in the da capo repeat. Her melismas were exceptionally clear and balanced across a wide ambitus, as in “Ferite, Uccidete,” in Act I. The cadenza to this aria, as well as others, featured some high-flying excursions into her upper range as well, a sort of virile sound matched by her convincing male stage characterization.
Chris T. Downey, Washington Classical Review, February 2019

Dido and Aeneas, Barbican, The Academy of Ancient Music
“…Her voice is organ-like, round and resonant, with gorgeous overtones, and a sense of line that made the recitatives hold taut the dramatic string pinched by Egarr’s continuo section at the other end. .. the pathos of Hulcup’s performance, first dreamlike, then pleading. It hurt in all the right places, a deeply moving performance enriched by a carefully controlled vibrato and tasteful ornamentation in keeping with the production’s restraint”.
Benjamin Poore, bachtrack.com  October 4 2018

Penelope,  The Return of Ulysses ROH

“…Caitlin Hulcup’s musicality, her depth of both tone and interpretation, that made one of the most significant impressions of the evening. If Hulcup really did learn the role from scratch in a weekend, this an achievement all the more magnificent; certainly, one aches to hear more of her in this repertoire, so stylish was her delivery. Her diction, too, was remarkable.”

2021 engagements included the title role in The Rape of Lucretia, Messiah in Switzerland and Austria, Das Lied von der Erde in Holland and the inaugural Liedfest Berlin Oxford. Further engagements were also to include Verdi’s Requiem in Amsterdam, a Basel Liederabend, Mozart’s Requiem with the Sydney Symphony Orchestra (under the baton of chief conductor Simone Young) and a recital with guest artists at the Melbourne Recital Centre.

Early in her career, Caitlin sang the title role of Handel's Ariodante at the Barbican in London and Teatro Real in Madrid with Les Talens Lyriques and was subsequently invited to reprise this role at Opernhaus Halle, Bayerisches Staatsoper and at Theatre an der Wien. She has performed as Meg Page (Falstaff) for Théâtre des Champs Elysées with Daniele Gatti, as Destino/Diana (La Calisto) at La Monnaie in Brussels under René Jacobs, Artaxerxes/Arbaces in Artaxerxes with Ian Page at the Royal Opera House London and as soloist in Beethoven's 9th Symphony under Gustavo Dudamel and at the BBC Proms. While engaged as a principal artist at the Wiener Staatsoper she performed Dorabella (Cosi fan tutte) and Rosina (Il Barbiere di Siviglia). Further roles included Cyrus in Handel’s Belshazzar with William Christie, Octavian at the Bolshoi Theatre with Vassily Sinaisky, Sesto (Clemenza di Tito) in Taipei, Cesare in Vivaldi’s Catone in Utica at Théâtre des Champs Elysées, Alceste (Admeto) at Theatre an der Wien with Alan Curtis, Calbo in Rossini’s Maometto II for Garsington Opera, and Donna Elvira with Maestro Zubin Mehta in both Valencia and Florence. She also gave her role debut as Octavian (Der Rosenkavalier) with Zubin Mehta for Maggio Musicale in Florence. She has performed as Aristeus (Rossi's Orpheus) in a Royal Opera House production at the Sam Wannamaker Theater of the Globe, London and as Octavian in Beijing under Sebastian Lang-Lessing.

Recent engagements have included the title role in Radamisto for Opera Lafayette America, Piacere in Il Trionfo del tempo e del disinganno for the Royal Danish Opera, Hansel in Hansel and Gretel for Grange Park, Orfeo in Orfeo ed Euridice with Fabio Biondi and the Finnish Radio Symphony Orchestra, Fricka in Die Walküre for Orchestra of the Music Makers, Singapore as well as a livestreamed Oxford Lieder concert with pianist and festival director Sholto Kynoch and the violinist Jonathan Stone.

Some of Caitlin’s career highlights include Penelope (Il Ritorno d’Ulisse) for ROH at the Round House January, Idamante (Idomeneo) in for TNSC Lisbon, Micah (Samson) with the Dunedin Consort, Beethoven Missa Solemnis with Martin Haselböck and the Wiener Academie, Rossini Stabat Mater with the Hanover Band, Orfeo (Orfeo ed Euridice, Gluck) and the title role in Ariodante for Scottish Opera, Idamante (Idomeneo) with Garsington Opera, Octavian for the National Centre for Performing Arts in Beijing, Iseult in Frank Martin’s Le Vin Herbè for Welsh National Opera, and Dido (Dido and Aneas) with the Hong Kong Philharmonic.

In Australia, Caitlin has sung Romeo (Capuletti ed i Montecchi) for Victorian Opera, Mahler Symphony No. 2, Beethoven Symphony 9, Ravel Mallarmé Songs and Mahler Des Knaben Wunderhorn with the Sydney Symphony Orchestra and been the featured soloist at Huntington Festival. She sang Rosina (The Barber of Seville), the title role of Carmen, Cherubino (The Marriage of Figaro), Donna Elvira (Don Giovanni) and Kate Pinkerton (Madama Butterfly) for West Australian Opera, and Hansel (Hansel and Gretel) and Cherubino for Opera Queensland. For Pinchgut Opera in Sydney she has sung Irene (Theodora) the title role of Vivaldi's Griselda, Irene in Theodora, as well as Gluck's Iphigenie en Tauride, all of which have been released to critical acclaim on CD.

Caitlin Hulcup is managed by Graham Pushee: graham@artsmanagement.com.au
February 2022
This biography is for general information purposes only and not for publication.
Please contact Arts Management for an up-to-date biography to suit your needs.