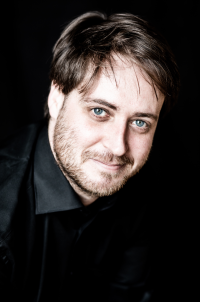 ‘Conductor Daniel Carter makes an auspicious mainstage debut, leading the redoubtable Orchestra Victoria in a confident, unflustered manner. Carter’s management of the orchestra, six singers and four percussionists on stage in What Next? is quite extraordinary.’
Simon Parris, Herald Sun, 19 August 2012.

‘All of the musicians negotiated a rich and complex score [Elliott Carter What Next?] under the expert guidance of Daniel Carter with considerable finesse.’
Heather Leviston, ArtsHub, 17 August 2012.

‘The entire performance exhibited a high level of professionalism, with fine conducting of Orchestra Victoria by Daniel Carter.’
Peter Burch, The Australian, 17 August 2012

Daniel Carter is Generalmusikdirektor of Landestheater Coburg, one of the youngest Generalmusikdirektors in Germany and the youngest in the history of the house.  This season in Coburg he conducts several symphonic programs.  Next season in Coburg as well as symphony concerts he will conduct Die Walküre (as a continuation of the complete Coburger Ring), The Rake’s Progress, L’Heure Espagnole and L’Enfant et les sortileges.  From 2019-2021 he was Kapellmeister at the Deutsche Oper Berlin, where he has conducted repertoire including A Midsummer Night’s Dream, La Boheme, The Tales of Hoffmann, Hansel and Gretel and The Barber of Seville.  His relationship with the Deutsche Oper Berlin continues in coming seasons, including a return with Die Fledermaus in December 2021.  Other highlights of coming seasons include his debut at the Hannover Staatsoper, his Italian debut, and a return to the orchestra in Freiburg, where he was First Kapellmeister for four seasons.

Daniel made his mainstage debut for Victorian Opera conducting the Australian premieres of Elliott Carter’s What Next? and Manuel de Falla’s El Retable de Maese Pedro, which resulted in return invitations to conduct El Gato con Botas, Rush Hour, the world premiere of Calvin Bowman’s The Magic Pudding (for which he was nominated a Green Room Award for Best Conductor) and performances of Victorian Opera’s Threepenny Opera at Sydney Theatre Company. He also assisted on Nixon in China (Adams) for Victorian Opera. Prior to his debut with Victorian Opera, he was awarded the Susan Harley Living Bequest, which enabled him to travel to New York to study What Next? with the composer, Elliott Carter.

Daniel began his association with Opera Australia as Assistant Conductor on Così fan tutte and Aida, and as conductor on the Opera Australia 2013 Tour of Don Giovanni. He has also conducted Sydney Symphony Orchestra; the West Australian Symphony Orchestra (as part of the Young Performers’ Awards Grand Final); the Melbourne and Sydney Festivals, including performances of Pierrot Lunaire with soloist Merlyn Quaife at the Melbourne Recital Centre, and Melbourne Youth Music and Willoughby Symphony

While assistant to Simone Young and resident repetiteur at the Hamburgische Staatsoper, his performances included Die Zauberflöte, Il Barbiere di Siviglia, and a double bill for the Opera Studio of In the Locked Room (Watkins) and Persona (Langemann).

Following his engagement in Hamburg, Daniel conducted Carmen and a premiere season of Gluck’s Orphee for Theater Freiburg, Germany, which led to his appointment in 2015 as First Kapellmeister. Since then he has conducted The Makropulos Case, the world premieres of Crusades (Vollmer) and Kaspar Hauser (Thomalla), L’Elisir d’Amore, Cosi fan tutte, Cendrillon (Massenet), Mefistofele (Boito), I Gioielli della Madonna (Wolf-Ferrari), and Philharmonic Orchestral concerts for the company, as well as Il Trovatore in Winterthur, Switzerland.

Daniel made his debut at Cologne Opera in 2016 conducting a series of performances of La Bohème, followed by his debut with the Münchener Kammerorchester, Hansel and Gretel and a Symphony Concert in Trier and in 2017, Carmen in Essen.

In 2018 his engagements included his debut with the Sinfonieorchester des Bayerischen Rundfunks Akademie in Munich; The Magic Flute at the National Theatre in Mannheim and in Freiburg the 2018/19 season included The Tales of Hoffmann, Katja Kabanova, La Bohème, Angels in America (Eötvös), Love Life (also for the Opera House in Bern, Switzerland), Eugene Onegin, Die Fledermaus, Pelleas and Melisande, Don Giovanni, Hulda (Franck),and several symphonic programs.  He toured Eurrope with the Australian Youth Orchestra as Associate Conductor in 2019 and Australia with the Momentum Ensemble.

Daniel Carter graduated from Melbourne University with a Bachelor of Music (Honours) having studied Composition and Piano. In 2012, he won the Brian Stacey Memorial Award for Emerging Conductors after completing a two year period as a Developing Artist Conductor/Repetiteur with Victorian Opera. A graduate of the Symphony Services International Core Conductors Program, he worked with the symphony orchestras in Queensland, Melbourne, Adelaide, Hobart, Perth, Sydney and Auckland and also taught at Symphony Services International as part of the Scholar Conductors Program.

Daniel Carter is managed by Graham Pushee: graham@artsmanagement.com.au
February 2021
This biography is for general information purposes only and not for publication.
Please contact Arts Management for an up-to-date biography to suit your needs.