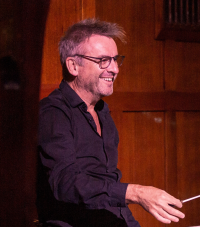 “Under the baton of conductor Paul Kildea, the Adelaide Symphony Orchestra shines and it is difficult to imagine Benjamin Britten’s score sounding better. “

The Turn of the Screw, Opera  Australia

“Opera Australia’s long winter season at the Sydney Opera House finished in a blaze of glory with a breathtaking Turn of the Screw…expertly cast with the finest singing actors, superbly directed by Neil Armfield, and with the 13-piece orchestra brilliantly conducted by Paul Kildea, it was as near to perfection as any opera performance can be.”

“Kildea proved to be an exceptionally sensitive Mahlerian.”

“When an overture elicits cheers and stamping from a Perth crowd, expect a spectacular show. And from the moment conductor Paul Kildea set the WA Symphony Orchestra off on Leonard Bernstein’s magnificent thumping rhythms, no performer disappointed.”

The Turn of the Screw, Victorian Opera

“Members of Orchestra Victoria under the baton of Britten specialist Paul Kildea almost stole the show; every nuance was brought to the fore, providing exactly the right level of support for the singers.”

“Immaculately conducted by Paul Kildea…On Saturday, every subtlety of Britten’s scoring could be heard…Kildea and Orchestra Victoria – splendid in their red tunics – were outstanding.”

Paul Kildea was a Young Artist conductor at Opera Australia when in 1997 he made his debut with Neil Armfield’s landmark production of A Cunning Little Vixen, after this assisting Simone Young throughout Europe, returning in these years to Opera Australia to conduct The Barber of Seville, La bohème, and The Turn of the Screw. He has subsequently conducted throughout Australia and Europe, including guest appearances with the Slovak Philharmonic Orchestra, Ensemble 2e2m in Paris, the Nash Ensemble in London, the West Australian Symphony Orchestra, the Sydney Symphony Orchestra, Queensland and Adelaide Symphony Orchestras, the Hamburg Philharmonic Orchestra, and for the Aldeburgh Festival, where during a four-year appointment as Head of Music he conducted an exceptionally broad repertory.

Paul’s appointment as Artistic Director of Musica Viva was announced in 2019. That year he conducted Albert Herring (Britten) for the University of Melbourne, and The Canberra Symphony Orchestra in a program featuring works by Arriaga, Rodrigo and de Falla. He also made guest appearances at the 10 Days on the Island Festival (Tasmania) and in the chamber music series, A Brief History of Time, at the Adelaide Festival. In 2021 Paul conducted highly acclaimed performances of Britten’s A Midsummer Night’s Dream at Adelaide Festival.

Some highlights of Paul’s career include return engagements with Opera Australia for The Magic Flute and A Midsummer Night’s Dream; to Aldeburgh for Albert Herring and Noye’s Fludde, in the Festival’s official celebration of Britten’s centenary; La bohème and Candide for Opera Queensland; War Requiem (Brno Festival, Bratislava Festival and the Australian Youth Orchestra in Sydney and Perth); Candide for Opera Australia (nominated for a Helpmann Award for Best Classical Concert); Strauss’s Vier letzte Lieder and Berlioz’s Les nuit’s d’été (Perth Festival); Strasnoy’s Six Songs for an Unquiet Traveller (Paris and London); A Midsummer Night’s Dream and Dialogues des Carmélites (Hamburgische Staatsoper); Mahler’s Rückert-Lieder (Perth Festival); The Turn of the Screw (Cheltenham Festival); his debuts with the Sydney Symphony Orchestra and the BBC Symphony Orchestra; studio recordings for BBC Radio 3; Jake Heggie’s Dead Man Walking (Sydney); concerts in the Palestinian territories; and a collaboration with Christopher Wheeldon and his company Morphoses (Sydney Festival). With the BBC Concert Orchestra and soloists Sarah Connolly and Allan Clayton he recorded the music for John Bridcut’s film Britten’s Endgame, while with artists Adam Bromberg and Oliver Chanarin he created an updated version of Brecht’s War Primer at the Photographers’ Gallery in London. His performances of The Turn of the Screw (Victorian Opera) in 2010 earned him a Green Room Award for Best Conductor of an Opera.

He has held artistic posts with the Aldeburgh and Perth Festivals, and was Artistic Director of Four Winds in coastal New South Wales for the successful 2014 festival, in which he commissioned and conducted Kate Neal’s modernist orchestrations of Cole Porter songs for jazz singer Michelle Nicolle. As Artistic Director of Wigmore Hall he revitalized the hall’s artistic programming, commissioning numerous works from young composers and discovering and launching a number of brilliant young artists and careers. At Wigmore he also conducted a broad repertory, including the complete Mahler orchestral song cycles in a critically acclaimed series with mezzo soprano Ann Murray.

Paul Kildea holds an honours degree in piano performance and a master’s degree in musicology from The University of Melbourne – where he is Honorary Principal Fellow and, in 2016, was a Miegunyah Distinguished Visiting Fellow – as well as a doctorate from Oxford University. He gives lecture-recitals throughout the world and is the author of many articles and chapters on music and culture in the twentieth century as well as two acclaimed books for Oxford University Press on Benjamin Britten (Selling Britten and Britten on Music), a composer whose work he has made a speciality on the podium as well as in print. Penguin Press published his major new biography of Britten, Benjamin Britten: A Life in the Twentieth Century in 2013, the composer’s centenary year, which is widely acknowledged as the best book on its subject: it was excerpted for BBC Radio 4’s Book of the Week (read by Alex Jennings) and acclaimed by the Financial Times as ‘unquestionably the music book of the year’. In June 2018 Penguin published his latest book, Chopin’s Piano: A Journey Through Romanticism, which the Wall Street Journal described as ‘An exceptionally fine book: erudite, digressive, urbane and deeply moving.’ It is currently being developed as a feature film.

Paul Kildea is managed by Graham Pushee: graham@artsmanagement.com.au
January 2022
This biography is for general information purposes only and not for publication.
Please contact Arts Management for an up-to-date biography to suit your needs.