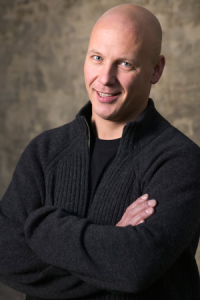 “Crabb’s unrivalled virtuosity shone throughout, with some astonishing, lightning-fast finger dexterity . . . He had superb control of expression, going from the impossibly soft to muscular, barking chords so typical of the tango style.”

“In quiet passages, James Crabb presses and expands his beloved accordion like a second set of lungs – or even a first set – squeezing out a sigh or a cadence as though it were his dying breath. In more active music he flicks offbeat accents and sudden outbursts with cool precision, both deadpan and deadly, creating incendiary momentum as though this is the last tango civilisation will hear and you might as well enjoy it. Yet this is not ego-driven performance. A hallmark of his playing is the way he listens and adjusts, matching a quiet note against a cadenza from ACO leader Richard Tognetti, or balancing an inner chord with violist Stefanie Farrands to draw out a darkening thought.”

“Crabb was an enthusiastic director in this work, engaging with all the musicians around him from his seat on the central podium… Crabb manoeuvred brilliantly between the plucky, rhythmic dance-figures and the more lyrical, singing melodies of his line. Particularly well-realised was the cadenza in the first movement; sensitively voiced and tantalisingly phrased.”
Laura Biemmi, Limelight, May 2021

“…Accordionist James Crabb might have an operatic career ahead of him. Dean’s decision to use this non-operatic instrument in the play-within-the-play scene is a masterstroke. It is such an unexpected sonority, and Crabb’s virtuosic playing underpins the broad comedy.”
Michael Halliwell, ABR, 20 June 2017

“…Accordionist James Crabb is spectacular in the concerto, The Singing.  From long mournful singing lines, bagpipe imitations and breathing bellows and winds, the accordion and orchestra create lush soundscapes”.

“The great strength of this Victorian Opera production, directed by Leigh Warren, is the impressive Tango Nuevo Ensemble, with James Crabb’s remarkable classical accordion that expresses the passionate heart of Piazzolla’s tango.”

“…an accordionist of dazzling virtuosity..., an embryonic genius emerged in James Crabb and a fine ambassador for his chosen instrument...”

“…Crabb was a magnificent soloist with outstanding tonal variety, rhythmical conviction and a superb sense of colour and projection”

“… Crabb presented himself as a consummate master of his instrument…”

A recognised and acclaimed authority on the music of Astor Piazzolla, James has performed with the original members of Piazzolla’s own quintet. He has directed Piazzolla’s Maria de Buenos Aires both at the Royal Danish Opera and for Victorian Opera.

James’ Piazzolla recordings include Song of the Angel with the Australian Chamber Orchestra and The Quintets with Richard Tognetti and the Tango Jam quintet. He is also featured in the documentary Astor Piazzolla in Portrait published by Opus Arte. Further recordings include transcriptions of Stravinsky’s Petrouchka and Mussorgsky’s Pictures at an Exhibition, The Singing (Beamish) with the Royal Scottish National Orchestra.

In 2022 James commences the year on a national subscription tour with the Australian Chamber Orchestra and Richard Tognetti, followed by a weekend of recitals at the Ukaria Cultural Centre, performances with the Melbourne Symphony Orchestra and at festivals including the Australian and Tasmanian Chamber Music Festivals, Oxford May Music, UK, Huntington Estate with the Goldner Quartet, and a residency at the Australian National Academy of Music.

In addition to completing his role as Artistic Director of Four Winds Festivals, in 2020-21 James was engaged as a soloist to perform with the Melbourne and West Australian Symphony Orchestras, the Israel Chamber Orchestra, the London Philharmonic Orchestra (performing the Brett Dean concerto The Players written specifically for him), and at the Canberra International Music Festival and the Australian Festival of Chamber Music, Townsville.

Highlights of recent seasons include appearances at the Adam Chamber Music Festival, New Zealand, performing and recording the new Brett Dean Accordion concerto The Players, with the Swedish Chamber Orchestra, performances with Dance Company Co.3 in Perth in a new work, “In Line”, a recital at Music in the Round, Abbotsford Convent, Victoria, performances with violinist Anthony Marwood at Ukaria, playing and directing Sinfonia Cymru, Wales and appearing in Brett Dean’s Hamlet in a new production of the opera at Opera Cologne. James has also performed  Piazzolla’s Aconcagua with the BBC National Orchestra of Wales and the Ulster Orchestra; conducted and performed in Victorian Opera’s production of Maria de Buenos Aires; played Stravinsky’s Petrouchka with the Tero Saarinen Dance Company in Europe and Asia; given the world premiere of a new work by Magnar Am in Oslo and in Japan; played Gubaidulina’s 7 Words with the BBC Symphony and at the BBC Proms; toured Victoria with the Australian Chamber Orchestra; and performed with the Camerata Salzburg, Australia Ensemble, Sydney Omega Ensemble, Southern Cross Soloists, Black Arm Band, Melbourne Symphony Orchestra, and at the Peasmarsh Festival, England and the Australian Festival of Chamber Music. With the Swedish Chamber Orchestra James and Brett Dean performed a new Accordion/Viola duo work, and in collaboration with Opera Queensland and Dance North he was music director of “Abandon”, based on the music of Handel.

Maintaining a high international profile, James has appeared as guest soloist and director of a new Piazzolla festival in Buenos Aires, performed the Birtwistle work The Last Supper with the BBC Scottish Symphony Orchestra, and created a major role on stage, written especially for him, in Brett Dean’s new opera Hamlet at Glyndebourne Festival Opera, a role which he later reprised at the 2018 Adelaide Festival. He also curated the 2017 ‘UKARIA 24’ weekend of performances.

James also continues his two exciting collaborations, one with violinist Anthony Marwood and the other with recorder player Genevieve Lacey. Crabb-Lacey’s first recording together, Heard This and Thought of You, has been released on the ABC Classics label.

James Crabb is managed by Graham Pushee: graham@artsmanagement.com.au
February 2022
This biography is for general information purposes only and not for publication.
Please contact Arts Management for an up-to-date biography to suit your needs.