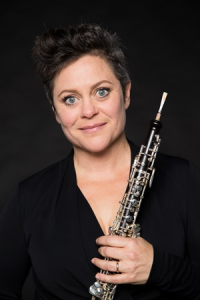 “Virtuoso oboist Diana Doherty is a force of nature. Her personal flair and energising engagement gives listeners an immersive experience that goes beyond mere excellence.”

“Gorgeous sound and incredible breath control combined with vivacity, beautiful phrasing – it doesn’t get any better than this.”

“…Diana Doherty played it like an incarnation of an exotic woodland bird, a mercurial animal of alert and sometimes savage energy, and force of creation all in one.  Doherty’s performance was a tour de force, interspersing cadenzas that wailed and shrieked like a trapped creature with dynamic virtuosity that flitted between chords as though her like depended on it.”

“Make no mistake, Doherty is oboe royalty.  And with Bernadette Balkus providing piano accompaniment fit for a queen, Doherty responded with playing of majestic calibre.”

“But last night the public loved it; Ms Doherty was a wonder…”

In addition to her performances as Principal Oboe with the Sydney Symphony Orchestra, this year Diana will continue her long-standing relationship with ANAM, where she will teach, coach and perform works by Beethoven and Strauss. She will also feature as soloist with the Sydney Symphony in the Strauss Oboe concerto. Last year Diana completed a national tour for Musica Viva with the Streeton Trio and returned to the Queensland Symphony Orchestra, performing the Mozart Oboe concerto.

Diana has been Principal Oboe of the Sydney Symphony Orchestra since 1997, a position she had previously held with the Symphony Orchestra of Lucerne from 1990 to 1997.  She was born in Brisbane and completed her Bachelor of Arts in Music Performance at the Victorian College of the Arts in Melbourne, where she was awarded the M.E.N.S.A prize for top graduating student. During this time, she also won the ‘Other Instruments’ section of the ABC Instrumental and Vocal Competition and was named ‘Most Outstanding Competitor Overall’ for 1985. Other awards and prizes include joint winner of the Young Concert Artists International Auditions in New York, first prize at Prague Spring Festival Competition, a MO award for Classical/Opera performer of the year and an Aria for her performance of the Ross Edwards’ Oboe Concerto.

Diana Doherty is managed by Graham Pushee: graham@artsmanagement.com.au
February 2022
This biography is for general information purposes only and not for publication.
Please contact Arts Management for an up-to-date biography to suit your needs.