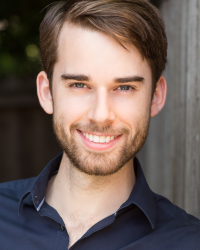 “But in many ways the most impressive all-round performance was given by one of the youngest singers, Jeremy Kleeman. He delivered a Figaro with panache and excellent vocal control. His rendition of Tutto è disposto was particularly memorable, moving around the stage brilliantly and singing with style and musical understanding.”

'Why do the Nations', Handel Messiah, Canberra International Music Festival 2017
“ …extraordinary young bass-baritone from Melbourne, Jeremy Kleeman whose dynamic rhythmic and melodic clarity, evenness of tone and assured presence delivered one of the truly great moments of this entire festival.”
Vincent Plush, Limelight Magazine, May 8, 2017

Marriage of Figaro, Regional Tour, Opera Australia
“…Fast rising bass Jeremy Kleeman makes his Opera Australia debut as Figaro, a role that is surely the first of a great many engagements with the company. A versatile and charismatic performer, Kleeman is reliably nimble and expressive in the role”.
Simon Parris, Man in Chair, July 16, 2016

Winner of the 2019 Australian International Opera Award, Bass Baritone Jeremy Kleeman is a graduate of the prestigious Opera Studio at the Royal College of Music, London.  In 2021, he made his debuts with both Opera Queensland and West Australian Opera in the title role of a new production of Le nozze di Figaro.

A ‘versatile and charismatic’ performer, Jeremy has created several roles in world premiere productions. Notably, Magus in Alan Curtis and Michael Gow’s baroque pastiche Voyage to the Moon (Musica Viva/Victorian Opera) for which his performance was nominated for both Helpmann and Green Room awards, Mr. Jeffris/Reverend Stratton in Elliot Gyger and Pierce Wilcox’s adaptation of Oscar and Lucinda (Sydney Chamber Opera), Toby Raven in George Palmer’s adaptation of Cloudstreet (State Opera of South Australia), and Albert the Pudding in Calvin Bowman and Anna Goldsworthy’s adaptation of The Magic Pudding (Victorian Opera).

Earlier career highlights include his Brisbane Baroque Festival debut as Teobaldo in Handel's Faramondo and appearances with Victorian Opera as Lord Valton in I puritani, Jonas Fogg in Sweeney Todd, Mother in Kurt Weill's Seven Deadly Sins, Rapunzel’s Prince in Into the Woods, Marquis D’Obiginy in La traviata and as a featured vocalist in Assembly at Melbourne and Sydney Festivals (with Chunky Move).

Jeremy Kleeman is managed by Graham Pushee: graham@artsmanagement.com.au
February 2022
This biography is for general information purposes only and not for publication.
Please contact Arts Management for an up-to-date biography to suit your needs.