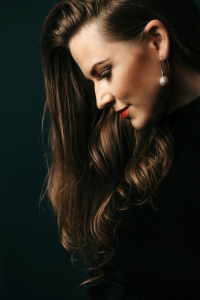 “…Controversial Ferenc Anger directs The Rake’s Progress where the highlight is Australian soprano Eleanor Lyons, who starred as fragile-as-crystal Mimi in Hungarian State Opera’s strikingly beautiful Christmas run of La bohème. It is worth attending The Rake’s Progress just to hear this captivating singer.

“Eleanor Lyons as Donna Anna, was also in stunning voice. She has an enormous sound and a laser-like focus, altogether giving her real star quality. It would be unsurprising were her career to lead her to graduate to heavier Wagner and Strauss roles down the road (following in the footsteps of Christine Goerke and others).”

Australian soprano Eleanor Lyons is the first prize winner of the 2013 International Obraztsova Singing Competition and has performed in Sydney, Tokyo, New York, throughout Europe and Russia. She completed a postgraduate diploma at the Royal Northern College of Music and studied at the Mariinsky Academy of Young Singers as well as the Sydney Conservatorium of Music, where her teachers included Elena Obraztsova, Barry Ryan and Viktoria Dodoka. In 2018, Eleanor was awarded the Michael Byrne Vienna State Opera Award by The Opera Foundation for Young Australians to study at the Vienna State Opera.

2022 sees Eleanor return to the opera houses of Antwerp and Gent to star as Mimi (La Boheme) and also in Schumann’s Scenes from Goethe’s Faust. On the concert platform she will continue her long-standing association with Philippe Herreweghe and undertake tours of Beethoven’s Christus am Oelberg and Missa Solemnis, as well as Strauss’ Four Last Songs in Budapest, Brahms’ German Requiem in Antwerp and Bruckner’s 150. Psalm in Vienna.

Most recently, Eleanor made her mainstage debut with Opera Australia as Donna Anna (Don Giovanni), performed as soloist in Verdi’s Requiem and Britten’s War Requiem with Philippe Herreweghe and the Antwerp Symphony; at the Grafenegg Festival with conductor Leon Botstein in two roles: Maria in Der Diktator by Krenek and in Hindemith’s Mörder, Hoffnung der Frauen; and with the Polish National Radio Symphony Orchestra in Katowice as soloist at their New Year’s Eve Gala with Australian conductor Matthew Coorey. Further performances include Verdi’s Requiem with Vlaamse Oper; Shanghai Opera as Donna Anna in Don Giovanni; Sydney Symphony Orchestra in Mahler’s Das Klagende Lied; Beethoven’s Ninth Symphony with The Belgian Chamber Orchestra conducted by their chief conductor Benjamin Haemhouts; at The Collegium Vocale Crete Senesi Festival in Asciano (Siena, Tuscany) the Cote d’Azur, New York and Tokyo in recital; the International Art Center de Singel in Antwerp and together with violinist Miriam Helms Ålien, cellist Ildikó Szabó, and pianist István Lajkó, she will create an ensemble evening dedicated to Dmitri Shostakovich's oeuvre at the Franz Liszt Academy of Music in Budapest.

Other engagements include Mahler’s Fourth Symphony, La Boheme and Berio’s Folk Songs with the Konzerthaus Orchestra in Berlin; Ravel’s Chants de Madagascar with the Budapest Festival Orchestra; Mahler’s 3rd Symphony with Ivan Fischer and the Budapest Festival Orchestra; Mimi in La Bohème and Anne Truelove in Stravinsky’s The Rake’s Progress at the Hungarian State Opera in Budapest; Musetta in La Bohème at the Bolshoi Theatre in Moscow; the alien-robot ‘Finella’ in a new opera George (Elena Kats-Chernin) throughout Germany; Zweite Dame (Die Zauberflöte) for Wexford Festival Opera; and a belcanto recital with the St. Petersburg Philharmonic Orchestra.

Eleanor has been generously supported by the Australia Council for the Arts, the Ian Potter Cultural Trust, The PPCA Performer’s Trust, The Australian Business Arts Foundation, The Opus 50 Charitable Trust, The Leverhulme Trust and other benefactors.

Eleanor Lyons is managed by Graham Pushee: graham@artsmanagement.com.au
February 2022
This biography is for general information purposes only and not for publication.
Please contact Arts Management for an up-to-date biography to suit your needs.